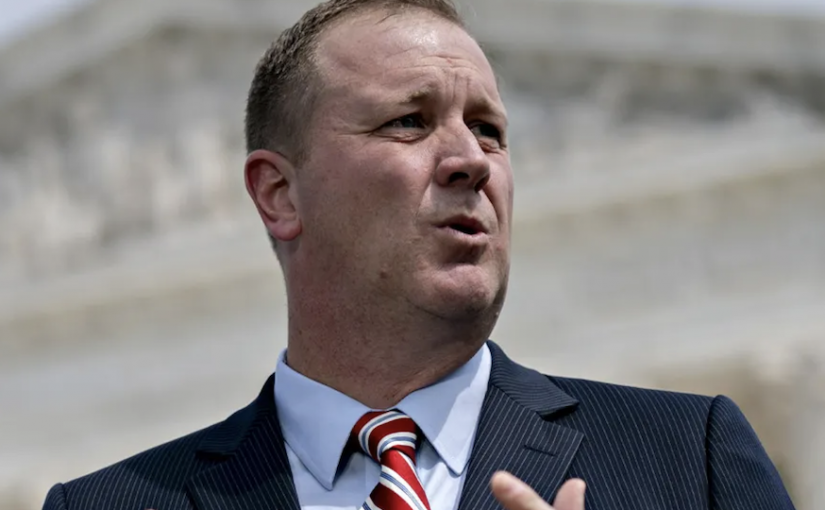 Please join us by making a generous contribution to his grassroots campaign today!

Eric is a tough, principled constitutional conservative who has fought for the rights of individuals against anti-American, anti-family elites colluding against them. During his tenure as Missouri’s Attorney General, Schmitt has been everywhere.

✓  When school boards tried to force students to wear masks against their parents’ objections, Schmitt took them to court on behalf of kids, families, and true science.

✓  When Big Tech firms colluded to cancel conservatives from their platforms, Schmitt launched one of the nation’s most extensive investigations into their discriminatory business practices.

✓  When woke activists attacked a Missouri high school football coach for leading his players in prayer before a game, Schmitt defended the coach and made clear to school officials that he did nothing wrong under the law or the Constitution.

✓  Schmitt was also the first Attorney General to sue the Chinese Community Party and the Wuhan Institute of Virology for their criminal negligence, coverups, and lies stemming from the origins of the Covid-19 pandemic.

These were all fights of choice by Eric Schmitt. He didn’t have to wage them, and there were plenty of reasons not to. Big donors and the media don’t like culture warriors, don’t like holding leftists accountable.

But Eric Schmitt doesn’t work for them – he works for the people. As Attorney General, he put Missouri families first. And in the Senate, he will put America First.

The most important job for senators in 2023 won’t be passing bills – not with Joe Biden in the White House for two more years. No, it will be investigations – subpoenaing documents, deposing witnesses, finding whistleblowers, and holding hearings. And we need a fighter like Eric Schmitt to do it.

For all Biden’s scandals, there’s much we still don’t know about:

– Hunter Biden’s shady business dealings.
– The border crisis and the location of illegal immigrants.
– Anthony Fauci’s role in the development of Covid-19.
– The FBI’s targeting of parents as “domestic terrorists.”
– White House collusion with Big Tech on censoring conservatives.

No one will pursue the truth more doggedly than Eric Schmitt. He will join Rand Paul, Ron Johnson, and others in uncovering the facts about how Joe Biden, the Democrats, and the media are trying to steal our freedom and destroy everything that made America great.

Join SCF in supporting Schmitt in Missouri’s Senate race this year – in the primary and the general. He is precisely what we need in Washington right now: a fighter, a truth-teller, and a defender of America’s Constitution and culture.

SCF will pay all processing fees and transfer 100% of your contribution to his campaign.

Thank you for being part of our team and for doing so much to help build a conservative Senate.